What is Feng Shui?

What is Feng Shui? 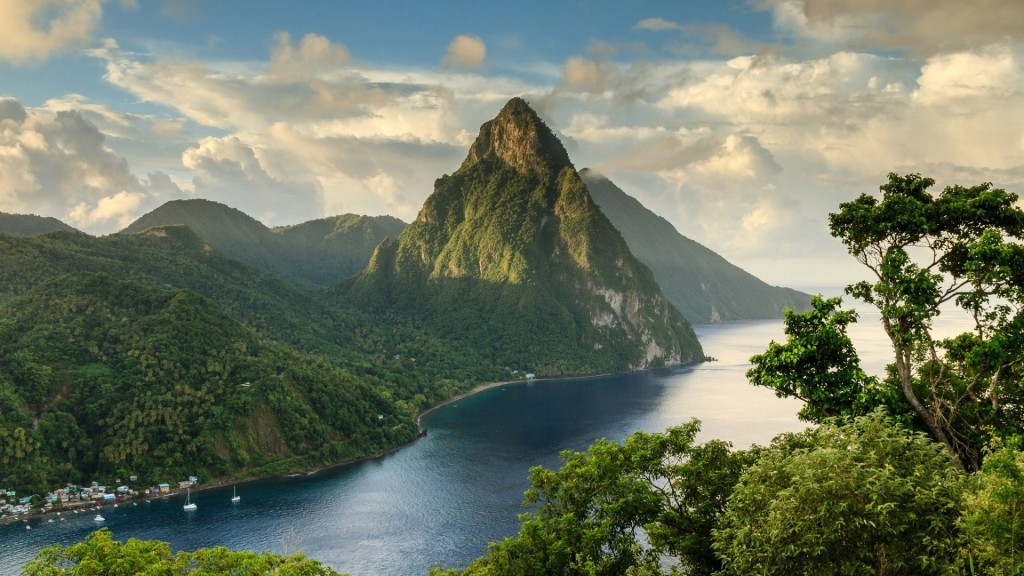 The study of Feng Shui takes us on a fascinating journey of discovery that blends several aspects of Chinese cultural practice. Feng Shui is an enticing composite of mystical beliefs, astrology, folklore, and common sense.

As we look in more detail at this ancient practice of wealth creation, our investigation will reveal Feng Shui to be a complex wisdom, based on the Chinese understanding of the dynamic flow of energy throughout the universe, and described through colourful symbolism.

Feng Shui is a profound art and science that have perpetuated thousands of years, not because purely belief and tradition. Feng Shui application is built upon theories and principles derived from the observations of the nature and this learning that have been tested and refined through the ages to what is known to us today.

To appreciate Feng Shui, we have to understand the fundamental building blocks of this metaphysic as follow:

First on the list is known as the Cosmic Trinity… Heaven, Earth and Human their inter-relationship.

Feng Shui is not the only thing that affects our luck…our destiny. The truth is Feng Shui is simply 1/3 of the equation. There are other factors that governs our destiny our life.

The three factors that determine our fate are the Heaven, Earth and Mankind luck, which is also called the ‘Trinity of Luck’. The word luck here might be a little misleading or limiting, because, without the prefix bad, we usually associate luck with good things. ‘Luck’ here refers to either bad luck or good luck.

Each of the ‘Trinity of Luck’ all affects our destiny and as you will see after reading my explanation of each luck they are all interconnected with each other.

Heaven’s Luck is something that is dictated by our birth and maybe the least of the 3 lucks that can be controlled. If you’ve been reading my blog, you now more or less understand that the principles of BAZI or Feng Shui states that our birth determines what kind of luck we’ll have or what kind of relationships are we going to have with our family and friends. In fact, it even defines our personality and character. Furthermore, it defines where we’re born, when we’re born, what kind of family we’re born into.  So this is something that’s beyond control, and this already dictates 1/3 of your life luck and may be hard to change. However, another school of thought states that our Heaven’s Luck is actually determined by our karma created in our past lives. This may be a little controversial for people who don’t believe in reincarnation, but Buddhism and Taoism both states that we do in our past life of past lives affects our present life, in the same manner, whatever we do now will have an effect on our Heaven’s Luck in our future life.

Also, in Buddhism, Heaven’s Luck refers to the intervention of the Buddhas and Bodhisattvas, thus the need to recite mantras, read and/or carry the Sutras, make offerings of incense, offerings of flowers, water, and food, etc.

The Taoist has a slightly different view regarding this matter, they believe praying to Taoist Gods, Deities, and Immortals can only bring so much help. Taoist believe that Taoist Gods can only help us up to the extent that is allowed by the luck determined by one’s Heaven’s Luck. Meaning, the power of Taoist Gods are not infinite when it comes to changing one’s karma. Our past deeds will have the final say as to the 1/3 Heaven’s Luck we have.

EARTH LUCK is Feng Shui. Most of you who have been reading my blog now will have basic understanding of how Feng Shui works, so I really won’t discuss EARTH LUCK here. However, I would like to say that we still don’t have full control of this because the truth is, although I really haven’t discuss it further on this blog, is that Feng Shui of our homes, office, neighbours, or personal Feng Shui are not the only Feng Shui that affects us. To a certain extent Feng Shui of the city, the province, the country and its relation to its location affects us also. As you will see this is also partly due to our Heaven’s Luck.

MANKIND LUCK is the thing that we may be able to totally control, but also more often than not it’s the thing that we neglect most. Mankind Luck refers to our thoughts, words, and actions that all create an immediate karma that also contributes to our over-all luck.  Furthermore, Mankind Luck basically refers to our everyday decision and course of actions on things that we do about every day matters like how we act or react on things done to us by our relatives, friends, colleagues, boss, or clients. It also refers on the things that we do on to ourselves, or on decisions regarding our work or business or career. Some Feng Shui teachers state that Mankind Luck is also defined by the actions of the people who surround us.

As you will notice these three lucks is not a stand-alone luck. They all work hand in hand. You might have a really bad Heaven’s Luck but because you practice good Feng Shui and create good MANKIND LUCK by creating good karma and by working hard you already have a 2/3 chance of a better life.

On the other hand, you can have very good Heaven’s Luck and may not be practicing good Feng Shui and/or continuously create bad Mankind Luck by being lazy or doing bad things. You would have obviously wasted your Heaven’s Luck.

In the same manner, you could be energizing your Earth’s Luck with good Feng Shui, however, you really have a bad Heaven’s Luck and continuously to create bad Mankind Luck by being lazy or pessimistic or by creating bad Karma. Then obviously Feng Shui won’t do anything long term or worthwhile for you. You would have negated all the good Feng Shui you created.

Furthermore, if you were to subscribe to the belief of karma and reincarnation, Mankind Luck will also have great effect on Heaven’s Luck. In the same manner that practicing good Feng Shui like what was suggested in my previous post about the Cicada will also help ensure a good rebirth, which is Heaven’s Luck.

I guess, what I’m trying to say is simple. Feng Shui works, but you need to work also. Furthermore, have faith in your God whatever religion you may have. 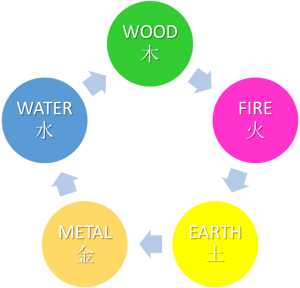 The universe and everything known and unknown to us are made up of the Five elements, namely Wood, Fire, Earth, Metal, Water

The ‘Five Elements Theory’ or commonly known as Wu Xing (五行生克), also known as the Five Phases, the Five Agents, the Five Movements, Five Processes, the Five Steps/Stages and the Five Planets is a fivefold conceptual scheme that many traditional Chinese fields used to explain a wide array of phenomena, from cosmic cycles to the interaction between internal organs, and from the succession of political regimes to the properties of medicinal drugs. The “Five Phases” are Wood (木), Fire (火), Earth (土), Metal (金), and Water (水). This order of presentation is known as the “mutual generation” (相生) sequence. In the order of “mutual overcoming” (相克), they are Wood, Earth, Water, Fire, and Metal.

The system of five phases was used for describing interactions and relationships between phenomena. After it came to maturity in the second or first century BCE during the Han dynasty, this device was employed in many fields of early Chinese thought, including seemingly disparate fields such as geomancy or Feng shui, astrology, traditional Chinese medicine, music, military strategy and martial arts. The system is still used as a reference in some forms of complementary and alternative medicine and martial arts. 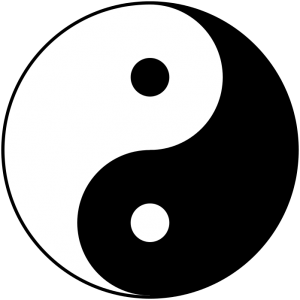 Yin and Yang are two opposing forces yet complimentary. Let me cover slightly more in the next few slides.

In Chinese philosophy, yin and yang (陰陽) describes how opposite or contrary forces are actually complementary, interconnected, interdependent in the natural world, and how they give rise to each other as they interrelate to one another.

Many tangible dualities, (such as light and dark, fire and water, expanding and contracting) are thought of as physical manifestations of the duality symbolized by yin and yang. This duality lies at the origins of many branches of classical Chinese science and philosophy, as well as being a primary guideline of TCM (Traditional Chinese Medicine) and a central principle of different forms of Chinese martial arts and exercise, such as baguazhang (八卦掌), taijiquan (太极拳) and qigong (气功), as well as appearing in the pages of the I-Ching（易经）

WHAT IS FENG SHUI?

A Study of “Chi” or simply a life force energy

Classical feng shui operates on the premises that if there is good qi flow throughout the area, and the property – be it one with a lot of land or a high-rise property – is receiving benevolent, positive qi, then the occupants of the property feel better, sleep better, and live better, and so are better able to achieve their goals in life.

First you need good qi in the environment. Next, your property needs to receive this qi. Finally, the layout of the home needs to be conducive, encouraging qi to permeate all the rooms and to meander and circulate around the property.

Making feng shui work for you is a matter of making sure that you have the qi, that you are using the right variety of feng shui ornaments (such as figurines, objects, crystals and symbolism but always try to keep the solutions simple but effective.

We will only introduce tried and tested techniques and practical applications, that are based on San He (Three Harmony) system and the legendary Eight mansions Theory.

Some relationship and financial situations are short term in nature. A small misunderstanding at work or shortage of cash. For example, is a classic illustration of this. For any of the above situations, the annual flying stars can be deployed, as the money problem is relatively recent or sudden (within the last three to six months) and represents a big change. It is therefore an annual flying stars problem, rather than a problem in the natal flying stars chart.